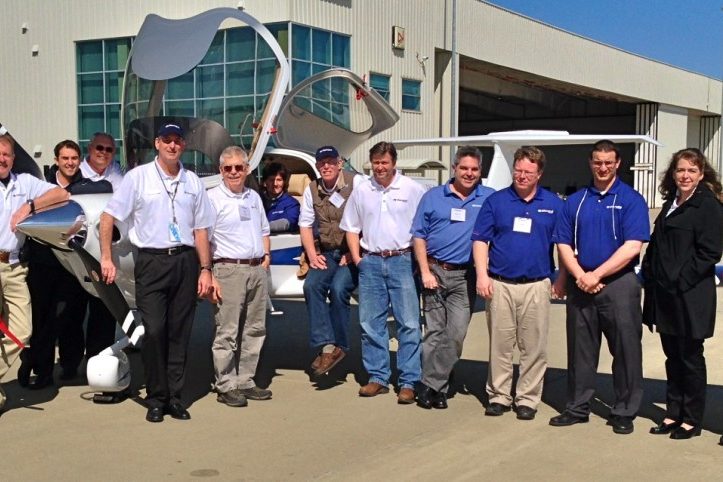 “As part of our strategic plan for Diamond to continue to lead the way in modern flight training we are executing our aggressive program of expansion of the Diamond Flight Center network. Our select flight training partners are organizations who are committed to providing their customers with a high-quality learning experience in the safest, easiest to fly aircraft in the market,” says Armstrong. “Providing flight training in Diamond aircraft represents a significant profit potential for the flight centers because Diamonds have the best fuel economy and total cost of ownership among training aircraft today. Also, since the Diamond line includes a full range of aircraft from the DA20 primary trainer to the high-tech turbo diesel DA42 twin, it’s easy for customers to transition to more complex aircraft, and enjoy a seamless training experience to whatever level they aspire.”


Brant Howell of SML Aviation in Roanoke, Virginia and Danny Kane of Kane Aviation in Salem, Virginia were awarded the Top 2012 Achievement Award. In less than one year working as a team they converted from several old airplanes to a full Diamond fleet, including two DA20s (one is G500), a DA40 G1000 and the recent addition of a DA42. “Coupled with their advanced motion flight simulators and top-notch CFIs, these Diamond Flight Centers are providing the very best results and learning experience in flight training today,” says Armstrong.

“We decided it was time for us to move into the 21st century with modern aviation technology for training aircraft, methods and tools. It was a scary decision for us to change our entire fleet of training aircraft, but it’s proven to be the best decision we ever made! The customers love the planes, business is booming and we have been growing beyond our expectations,” said Brant Howell, owner of SML Aviation and recipient of the 2012 Top Achievement Award.

Susan Naylor Adams and Christian Goss of Cargill Aeronautical Academy were also recognized with a 2012 Achievement Award for their work and dedication developing as a Diamond Flight Center last year. “The DA20 is a great trainer,” says Adams, President and CEO of Cargill, which is located in New Cumberland, Pennsylvania.  “It generated a tremendous amount of excitement among our students.  It’s safe, sleek, easy to fly and has all the latest glass panel technology,” she added.  “With our logo on the side, it attracts attention wherever students fly.  The proof of its popularity as a trainer is that even in the months that are traditionally slow for flight training, rental hours are close to last summer, when utilization was at its peak.”

Ann and Kevin Rychlik and their entire team at American Aviation at Manassas Airport also received a 2012 Achievement Award for their success developing as a Diamond Flight Training Center.  They started with no fixed wing aircraft only a few years ago, and now have an impressive fleet of Diamond Aircraft and a professional staff to serve the Washington, DC metropolitan area.

“With our new DFC development process we are able to help flight training operations that have not previously used Diamonds to get started. The program focuses first on helping schools set their goals, and then supports the execution of their transformation plan,” says Armstrong. “It’s working very well and the schools are excited about their transformation and growth.”

The Power of Telepathy