Would you like to save a $1.00 on every gallon so you could fly more and help the environment too? 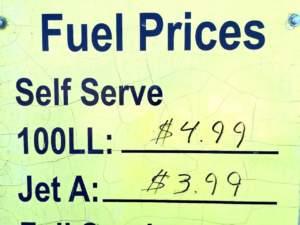 Pilots are always looking for ways to make their flying more justifiable and economical. We wanted to take a moment and shine the light on two paths that can transform the economics of flight. The first is the type of fuel they are burning. All over the US Pilots are flying General Aviation aircraft burning leaded 100 octane “Av Gas” paying between $5 and $7 a gallon and even more in some places.

Why does 100LL “Av Gas” cost so much? Well the answer is simple. 100LL fuel is a niche low volume fuel that is declining in volume. The refiners charge more because it’s an inconvenient fuel for them to make and transport. I’m told that only one company in the world produces the tetraethyl lead additive  The margins for retailers are less as well which has FBO’s focus on attracting customers that burn Jet-A. The EPA has been trying for many years to ban it due to the lead and the info regarding the reasons for the world wide phase out via wikipedia makes for every interesting reading.

Alternatives are in development but everyone says they will likely cost more. So what is a pilot to do?

The answer is right there in front of us…the rest of the world figured it out years ago. Simply change to JET-A and you will buy fuel for $1 per gallon less on average.

So how do you do you make the change to Burn JET-A?

LifeStyle aviation specializes in modern aircraft including the amazing modern Jet-A burning Pistons. What makes them amazing you ask besides they save a $1 a gallon?  Well they burn almost half as much as our traditional air cooled 100LL engines. How can they be so efficient you ask? 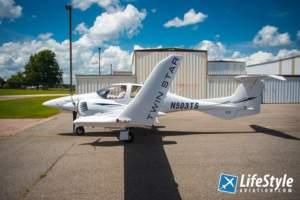 r gallon, diesels are inherently more efficient and with electronic computerized control of all starting, combustion, prop setting, power and every aspect of operation the power-plant is remarkably efficient. Add also the fact that they are also Turbo Diesels and the near perfect aviation power plant answer is here and oh yeah its “Green” too with no toxic lead fumes.

I have been enjoying flying a Diamond DA42 recently and can’t help but be amazed with every flight that I can run two engines for equal or less total burn that a comparable single… AND save $1 for every gallon I burn and the full gallon price for the ones I don’t burn!

Here are a few quick hypothetical examples to consider: 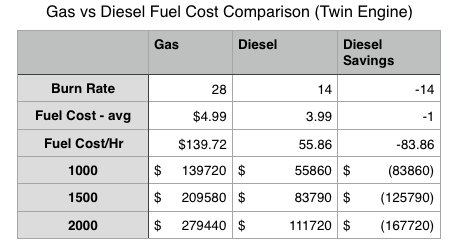 Some people still think the diesel technology for aviation is “New” and cutting edge and since they don’t have any exposure to it they steer clear worried about some aspects of maintenance or some other unfounded “fear”. They stumble on to buy a  gas aircraft never realizing the impact of the their choice on true economics of ownership and utilization.

Often overlooked is the fact that these environmentally friendly Jet-A diesels have been delivered by Diamond since 2002 in the DA40 and 2006 in the DA42. Jet-A diesels don’t have magnetos or spark plugs to worry with or replace. They don’t have hot starts or cold starts or shock cooling and oil changes are every 100 hours instead of 50.

The cost to develop new technology in aviation is a formidable hurdle and is a fundamental factor that has stuck the industry in a time warp connected to the “Elvis Era”. Pilots are still transporting themselves around with engines designed originally in the 1950’s in airframes that are over 40-50 years old while the EPA plots the demise of their toxic leaded fuel. In this backdrop combined with everyone wanting to be “green”, something that dramatically increases efficiency, reduces operating costs and enhances ease of operations should be embraced “overnight” as the “only way to go” like it does in other industries.

We like to say that our only competitor to these advancements is lack of first hand exposure and personal experience.  In that realm LifeStyle Aviation specializes in helping clients explore the value and economics of the full scope of aviation options first hand so they can make the best choice for their desires and goals. This brings us to our next important potential to share and that’s the expansion of LifeStyle Aviation’s DiamondShare program to now include the Jet-A burning Diamond DA40 NG single and DA42 and DA62 twins. The DiamondShare Program creates a unique economic lever to help create easily justifiable economics for ownership or access while the efficiency of the Jet-A FADEC diesels provide a compelling way to reduce the costs associated with every flight hour.

Call LifeStyle Aviation and we will share all our ownership and access options and help you determine the best way for you to enjoy modern aircraft for less than you might think.

The next time you buy a tank of Av Gas stop to do the math then give us a call to explore all your options.