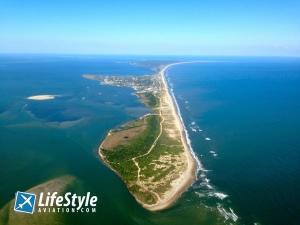 Many folks get involved in aviation looking for a way to get to business and pleasure destinations faster. When a great example of this comes up we like to share it with our readers.

The coast of North Carolina with its paradise called the “Outer Banks” represents a  sportsman’s nirvana. The eastern tip of the outer banks is where the famous Hatteras Lighthouse is and where anglers go for amazing surf fishing and super quick access to the gulf stream. Hatteras is loosely connected to the world via a ferry from the mainland and a ferry from Ocracok 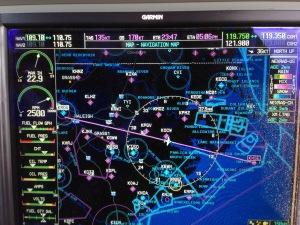 e Island and from the North via the Bonner Bridge coming down from Nags Head and the Kitty Hawk area. Its a solid 5 hour drive from the capitol city of Raleigh located only about a 150 miles away due to the route, bridges and two lane beach traffic. This means anglers wanting a weekend fishing excursion have a 10 hour round trip in store.

I scheduled our departure for Saturday afternoon so I could have most of the day for other activities. By air in the Diamond DA40 XLT in air conditioned comfort we took off at 4PM on Saturday afternoon and arrive in less than an hour due to a very nice tail wind and efficient speed of the modern DA40. The anglers that drove there to meet us spent the day on the road and arrived well after us. The route is direct with with no restricted airspace in the way. The letdown from 7500 ft over the Pamlico Sound was a sight to see. We enjoyed a tour of the beach and Hatteras light at 500

feet as a treat since we were in no hurry to leave our perch that provided such a beautiful view of the islands.

This particular trip was for Cobia fishing something I’ve never experienced before. One difference is we don’t head out until 7AM since its a mid-day event with high sun used to help spot the large Cobia just under the surface. Once spotted the boat gets very active with our crew of six anglers trying to put their jig closest to the pack of fish. It was amazing to be able to watch the whole process unfold as the fish attacked the lures. Then the excitement begins! Imagine 3 to 6 guys all holding on to 30+lb fish moving all around and the guys trying to keep their fish from tangling with the guy beside him. It makes for some serious excitement. The first half of our day was a bit slow and we were starting to wonder if our haul would be less than 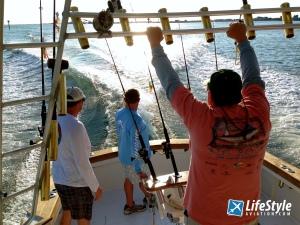 satisfactory when all of a sudden we came on a large school and literally every one of the guys was hooked up at the same time and several multiple times. The back of the boat exploded with flopping monsters being gaffed and brought in one after the other. Wow it was quite an experience. When the water settled we had our limit minus one so it was time to head for the dock.

m! Something big got on. Compared to the rest of the day it had to be one of the biggest. The guys were all wondering what it was since surely you don’t catch Cobia trolling. After a fight that last for what seemed like quite a while finally we got the glimpse of one of the largest Cobia caught for the day. Once gaffed and pressed into the overflowing fish hold it was time to head in and we realized it was only 2PM and we were done!  It was an amazing day and the best part was after a few shots at the dock with the fish we whisked off to the airport a few minutes away and about an hour later were on the ground headed for home in time for dinner with the family. 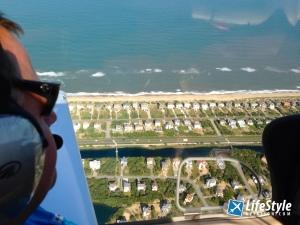 Airplanes make for some great lifestyle options and once you’ve experienced living this way using modern aircraft you’ll understand why we refer to them as “Magic Carpets”.  We hope you jump aboard.

Selecting a prop for your DA40