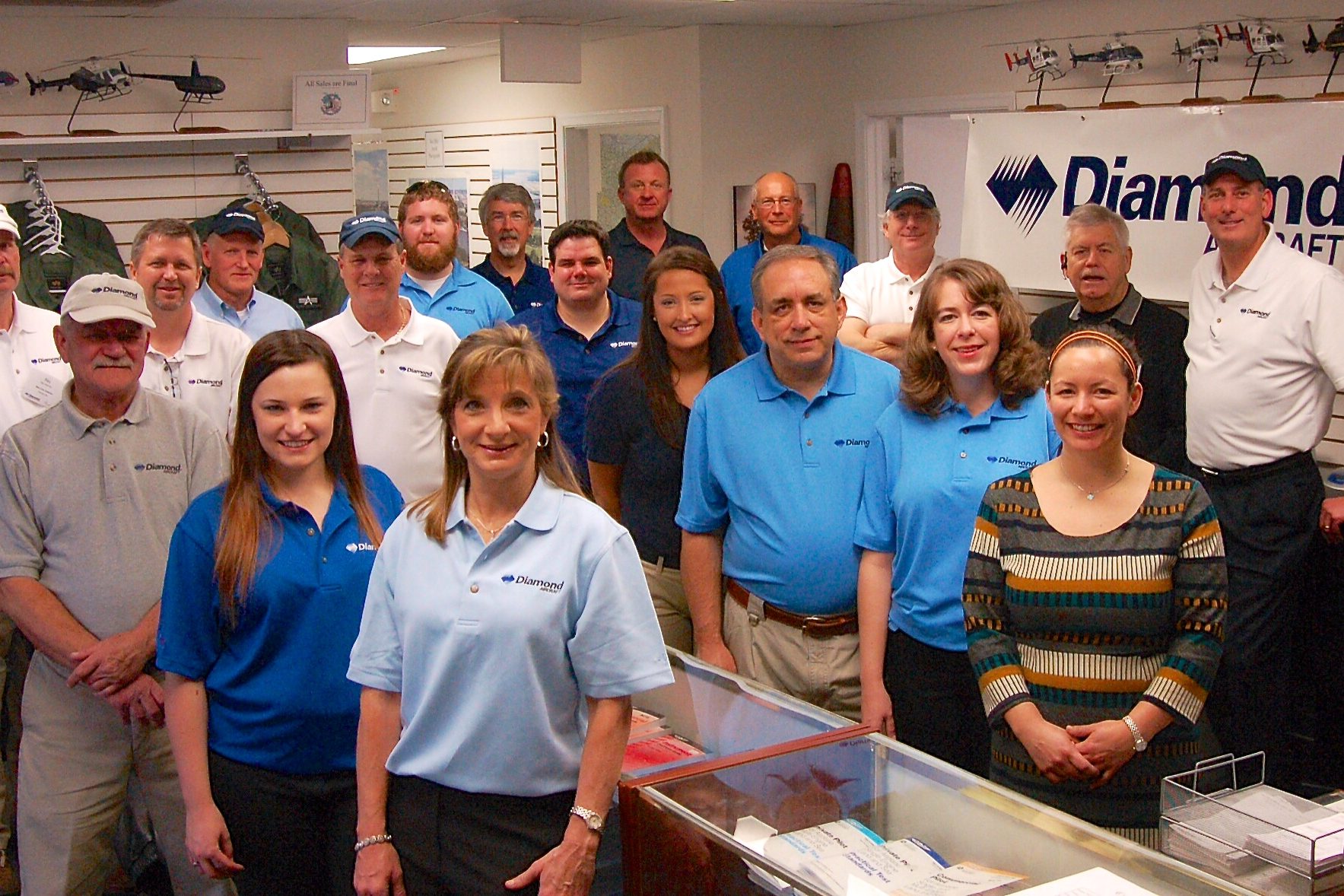 Marking the second annual meeting of the Diamond Flight Center Development Council, John Armstrong, President of the Diamond Regional Distribution Center (DRDC), Dominion Aircraft Sales, applauded the group’s progress and their contributions to support each other’s growth.  “Though the market continues to be challenging, this group has much to celebrate.  Flight centers in our group opened new locations, added maintenance capabilities and expanded their fleets in the last year,” stated Armstrong. “The concept we envisioned of flight center owners working together to increase the potential of the entire group is having visible results and is highly valued by the participants.”

The Diamond Flight Center Development Council has grown to double digits and includes Flight Centers from over a half dozen states. The group is led and facilitated by Dominion Aircraft Sales, the Diamond Regional Distribution Center for the East Coast / Mid-Atlantic Region. What makes the Development Council unique is flight centers can join before they qualify as a full Diamond Flight Center and the group creates an environment of support to help them grow and meet their goals. Other participants that have been successful share their encouragement for those that are beginning the new direction to modernize their fleets and training methods.

Ann and Kevin Rychlik and their entire team at American Aviation and American Helicopters at Manassas Airport served as the council meeting hosts.  American Aviation provided the participants with a tour of their fixed wing and helicopter operations and provided the group logistics and first class meeting accommodations at their corporate offices near the Manassas airport. “We enjoyed the opportunity to share with the group what’s worked for us and hear what’s working for them,” stated Ann Rychlik, President of American Aviation. “The process is something we really enjoy and believe in.”

“American Aviation was so generous in their sharing with the group. They were a perfect host for this event since they started only about six years ago with no fixed wing operations and have grown consistently to be one of the most extensive Diamond Flight Centers in the region,” added Armstrong. “They were a clear inspiration for our other members.”

Brant Howell of SML Aviation in Roanoke, Virginia with his strategic partner Danny Kane of Kane Aviation in Salem, Virginia was recognized with a Top 2013 Outstanding Achievement Award. In their second year of participation, they enhanced their existing Diamond fleet by adding a DA42, and two DA40s plus adding a service shop in Roanoke. They expanded from their main location in Roanoke to add a second flight training location at Lynchburg, VA. “With their modern Diamond fleet coupled with their advanced motion flight simulators and top-notch CFIs and service, Brant and Danny are leading the way to provide the very best results and learning experience in flight training today,” said Armstrong.

“Our decision to move into the 21st century with modern aviation technology for training aircraft, methods and tools along with changing over our entire fleet to Diamonds was a bit scary, but it has paid off!  We also opened another flight school location in Lynchburg and having the Diamonds there has been a huge advantage for us. The customers love the planes, business is booming in both locations and we have been growing beyond our expectations,” said Brant Howell, owner of SML Aviation.

Council members from Blue Line Aviation LLC of Raleigh NC, Trey and Kelsey Walters along with Ray Walters, were recognized with a 2013 Outstanding Achievement Award for their work and dedication to develop as a Diamond Flight Center.  Blue Line started in late 2012 and dedicated themselves to offering modern flight training in a fun community atmosphere. Their clients quickly came to love the Diamond DA20 and DA40 aircraft and Blue Line has grown rapidly even expanding to a second location in their first full year of operation.

The group also recognized Glenn Lawler of SouthTec Aviation and Stuart Dillon of Dillon’s Aviation for their Dedication and Exceptional Support.  “Building successful flight training operations requires rapid access to technical expertise in the field and these two gentlemen consistently go beyond the call of normal duty to help our members succeed. For their service the team is very grateful,” Armstrong stated.

“The proven DFC Development process supports flight training operations that want to move in the direction of 21st century aircraft. The program focuses first on helping the school set its goals and then support the execution of their conversion plan,” says Armstrong. “It’s working very well and the schools are excited about their transformation and growth.”

As part of their strategic plan to continue to lead the way in modern flight training, the group is continuing to seek out flight schools that wish to be part of a progressive growing network. Selected flight training partners are organizations who are committed to providing their customers with a high-quality learning experience in safe modern aircraft. The members align themselves to offer access to Diamond Aircraft.  “Providing flight training in Diamond aircraft represents a significant profit potential for the flight centers because Diamonds have the best safety record, fuel economy and total cost of ownership among training aircraft today,” remarked Armstrong.  “Also, since the Diamond line includes a full range from profitable DA20 primary trainers to high tech turbo diesel DA42 twins, it’s easy for customers to transition to more complex aircraft, and enjoy a seamless training experience to whatever level they aspire.”

Dominion Aircraft Sales is the Diamond Regional Distribution Center (DRDC) for the Mid-Atlantic and North East region. Dominion works in concert with Premier Aircraft Sales, the DRDC in the Southeast, to offer comprehensive services for the entire East Coast including extensive pooled inventory of new and used aircraft accessible through the networks exclusive GlassPlane.com site.