“Emerging concepts such as LifeStyle Aviation’s DiamondShare program are piquing the curiosity of pilots who like the idea of flying modern, well-equipped airplanes for a fraction of the cost of full ownership.”

If you haven’t noticed, general aviation is on the verge of a mini revolution — and it has nothing to do with jet-fuel-burning diesel engines, shiny new glass cockpits or multibillion-dollar NextGen modernization programs. Instead, the big change in aviation centers on the new millennium’s “sharing economy” and you, the pilot — or, more precisely, the choices you the pilot will be able to make in the not-so-distant future about flying yourself wherever and whenever you want.The idea of sharing resources is catching on in a big way — we share our cars, our couches and just about anything else that can be advertised through a smartphone app or website. We’re even starting to share airplanes in ways that would have been unthinkable only a decade ago.Imagine this: You show up at a small airport anywhere in America and pull out your phone or tablet. On the screen of your plane-sharing app you find a dozen privately owned airplanes you can fly right now. There’s a gorgeous late-model Beech Bonanza, an older but less pricey Cessna Skyhawk and some enticing options in between. You tap the screen to book the airplane you want, head over to the FBO office to retrieve the keys and minutes later proceed on your way. The rental charge for your flight is automatically deducted from your bank account, including the fuel and even insurance. After the flight, you rate the experience to let other potential renters know whether they should go with that same Piper Cherokee or perhaps choose something else. 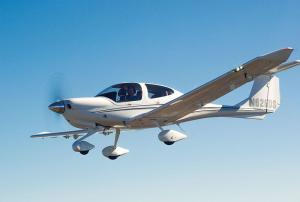 There’s no getting around the fact that general aviation is expensive. but new business models centered on sharing economy ideas are helping spread the costs around, making flying more affordable for more pilots.

This app doesn’t exist today, but there’s really no reason why it couldn’t. The technology-fueled share economy suddenly is intensifying in size and scope, and with it our notions about how, where and what we fly are on the cusp of radically changing for the better.

Access, Not Ownership
We’re seeing signs of this shift already as tech-savvy providers like OpenAirplane, AirPooler, Flytenow, FlightClub and others seek to make flying and owning airplanes more affordable and simpler than ever.

I joined this “collaborative consumption” wave a couple of years ago when I became a member of ­DiamondShare, a shared-leasing program that gives members 100 hours of access a year to a new Diamond DA40 for a fraction of the cost of owning the airplane outright — and with no depreciation hit down the road or recurring maintenance and repair bills to worry about.

The hourly cost is on par with renting an older, slower and less well-equipped airplane, with the difference being that I can take the Diamond on trips for a couple of days or even a couple of weeks if I so desire — and fly with confidence knowing I’m seated behind the latest technology, including a synthetic-vision flight display, traffic and terrain awareness systems, a terrific digital autopilot and SiriusXM weather data. 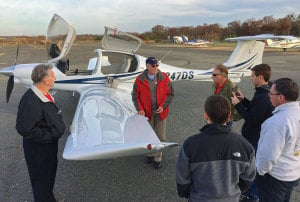 Emerging concepts such as LifeStyle Aviation’s DiamondShare program are piquing the curiosity of pilots who like the idea of flying modern, well-equipped airplanes for a fraction of the cost of full ownership.

Still, the vanguard of entrepreneurs leading the way in this brave new world has hit some turbulence in the early going. New ideas can be both labor and capital intensive, as many of these start-ups are learning. And just like ride-sharing services such as the suddenly ultrapopular Lyft and Uber have run afoul of some old-economy regulations, aviation app developers have experienced regulatory snags as well. FlyteNow, for instance, is suing the FAA for the right to establish a flight-sharing website that would take advantage of private pilot cost-sharing rules first defined in the 1960s and expand them online.

It’s messy at the moment, but it shouldn’t take long for legal clarifications on a whole range of issues, leaving the ideas that are compatible with FAA regulations free to enhance, or in some cases upend, traditional aviation business models.

Many flight schools, of course, complain about new students showing up on the flight line less often these days. Light aircraft manufacturers, meanwhile, lament the economic reality of selling only dozens of a particular model of airplane each year versus over a thousand at the height of the market 40 years ago.

One major barrier the industry faces is rising cost, for everything from fuel to insurance to maintenance and hangar space. Meanwhile, increasing liability and litigation costs are hamstringing all GA manufacturers at a time when there’s more competition than ever for consumers’ hard-earned disposable income. As a result, the pilot population has declined since the 1980s from around 350,000 private pilots in the United States to fewer than 200,000 today. 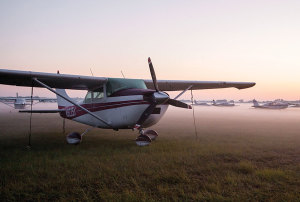 Companies like OpenAirplane now let individual owners rent their airplanes as a way to earn revenue on the side.

Are rising costs really the biggest impediment the industry faces? Much of the evidence we see points to the answer being a definite yes. Consider, for example, that for many years through the 1960s and 1970s, a new four-seat general aviation airplane like a Cessna 172 consistently sold for about twice the median annual household income in the United States. Today, that same airplane costs seven times median income.

In 1967, for instance, a new Skyhawk was priced at $12,750. Median household income that year was $6,054. By 1977 the price of a new Skyhawk had climbed to $22,300 while household income had risen to $11,992. By the late 1990s, however, when Cessna re-entered the piston market after a lengthy production hiatus, airplane prices began a steep rise. Despite household wages remaining relatively flat for the last couple of decades, the $350,000 price of a new Skyhawk today is no longer neatly aligned with the U.S. median household wage of around $52,000 a year.

You can make the argument that a Skyhawk sold in 2015 is a significantly different product than one that rolled out of the factory in 1967, but better avionics and a nicer interior don’t tell the whole story. Airplanes are expensive. They can provide incredible utility, obviously, but the pool of pilots who can afford to buy a new plane is shrinking while the glut of used airplanes from the 1960s and 1970s keeps aging.

That’s where the sharing economy and pioneering examinations of new ways of satisfying aircraft “ownership” needs can help stem the decline in general aviation, says a new breed of aviation entrepreneur.

“The shared ownership concept in aviation is really just getting started,” said Jamail Larkins, founder of Ascension Air, an Atlanta-based company that sells fractional shares in new Cirrus SR22s. The business model is aimed at making the economics of flying a high-end piston single more palatable for more pilots while reducing the hassles of aircraft ownership. “When we’re talking about an $800,000 airplane, a quarter share is much easier to justify. Around 70 percent of the folks in the market for a piston airplane who sit down to talk with us end up joining our program.”

Besides the lower purchase price for a share, there are other benefits as well. Ascension Air eliminates traditional ownership headaches (like having to deal with maintenance) while at the same time doing away with potential financial surprises. Based loosely on the model of business jet fractional ownership pioneered by NetJets, the company offers a range of options including leases and a “prop card” that let’s you buy only the amount of time you need.

Another provider known as PlaneSmart has gotten in on the ground floor of the shared-ownership revolution, also with a business built around a fleet of Cirrus piston singles. The company was founded about a decade ago on the principle that access to modern, well-equipped airplanes can be less daunting for the pilot if a third-party manages the aircraft, leaving the share owner free to focus just on flying. Challenging Old AssumptionsIf you don’t fly enough in a year to justify full ownership, fractional programs like these can be a great fit. How do you know if your flying warrants full ownership versus buying a share? From his experience, Larkins said the sweet spot seems to be around 160 hours per year. If you fly more than that, owning an airplane outright starts to make economic sense. Any less, and a share just might be a better option. John Armstrong, founder of LifeStyle Aviation and the creator of the DiamondShare program, agrees. He said he envisioned DiamondShare as a way of getting a new generation of pilots involved in general aviation, not necessarily by providing them with the lowest-cost solution to their travel needs but instead by introducing them to modern, glass-panel airplanes that represent the future of aviation rather than its distant past. “When somebody who’s interested in learning to fly shows up at a traditional flight school, a lot of them are turned off by what they see,” Armstrong said. “They see lots of old airplanes, and frankly an old way of thinking. A lot of potential students turn around and walk right back out the door never to return because the airplanes are 50 years old and the school’s methods and process of training are 50 years old too.” DiamondShare seeks to make each member’s experience as close to whole ownership as possible while spreading the costs around. Here’s how it works: One member in the program buys a new DA40 and turns around and leases flight hours (based on tach time) to two or three other members. Online scheduling and rules about how many reservations each member is permitted to hold at a time ensure the airplane has high availability. Members leasing hours in the airplane pay a monthly fee, plus for the fuel they use. Aircraft owners receive payment at the end of each month, which usually covers the loan payment on the airplane. The idea of a “free” airplane certainly piques the curiosity of many pilots. But why not take the same concept and apply it to a 1967 Skyhawk? Armstrong said he’s in the process of adding used airplanes to the program, but only nearly new models. Older airplanes like those preferred by many flying clubs and flight schools, he said, don’t serve the needs of the new wave of younger pilots who want to go fast in an airplane that’s packed with the latest technology and looks good taxiing up to the fuel pumps. “That’s really where flying clubs miss the mark,” he said. “They’re taking the economics of 30 people and pointing it at a 1970s airplane. They squeeze a penny, but at the same time ignore the potential of drawing in a new generation of pilots. Clubs aren’t participating in general aviation’s renaissance, and that’s the problem.” What GA really needs, he said, is a way to provide unfettered access to modern, well-equipped airplanes at prices that a larger pool of private pilots can afford. The airplanes don’t all need to be brand-new $400,000-plus models, but by the same token, a ratty 1970s-vintage Cessna or Piper single for rent at the local FBO doesn’t herald aviation’s future, he said. 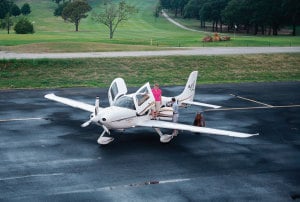 Based loosely on the business jet fractional ownership model pioneered by NetJets, high-end providers like PlaneSmart and Ascension Air have made shared-ownership programs built around fleets of Cirrus Singles.

Video: Maiden Flight of the DA50-JP7 with Turbine