Diamond Aircraft Industries in collaboration with Siemens AG is pleased to announce the first flight of a jointly developed multi-engine hybrid electric aircraft, commenced on the 31st of October 2018 at Diamond Aircraft’s headquarters in Wiener Neustadt, Austria.

Air traffic growth is expected to continue to increase at a rate of up to 5% per year. Using only current technology, this will lead to an increase in emissions and a depletion of fossil fuel reserves. Innovation is thus needed to keep future flying sustainable. This includes the development of highly efficient drive systems that will contribute to the reduction in fuel consumption and, therefore, aid in the protection of the environment.

For this reason, Siemens AG and Diamond Aircraft Industries have partnered to develop a multi-engine hybrid electric aircraft. The main objective of this project is to develop an aircraft that has a lower fuel consumption (higher efficiency), as well as a lower noise footprint. The hybrid powertrain will allow for full electric take-off capabilities (without the added noise and pollution of a combustion engine).

To demonstrate this serial-hybrid technology, a DA40 aircraft was reconfigured to support a hybrid electric powertrain. In this system set-up, one combustion engine is powering two independent electric drive systems consisting of one motor, battery and inverter each. Two electric engines have been added on a forward canard, which combined can generate 150kW of take-off power. The diesel generator is located in the nose of the aircraft and can provide up to 110kW of power. Two batteries with 12kWh each are mounted in the rear passenger compartment, and act as an energy storage buffer. With a dedicated power lever, the pilot can control the energy flow between the generator, batteries and motor. The pilot can select either pure electric mode (generator off), cruise mode (generator provides all power to the motor), and charge mode (generator charges the batteries). Pure electric, the aircraft has an endurance of approximately 30minutes. The hybrid system extends this to 5 hours. 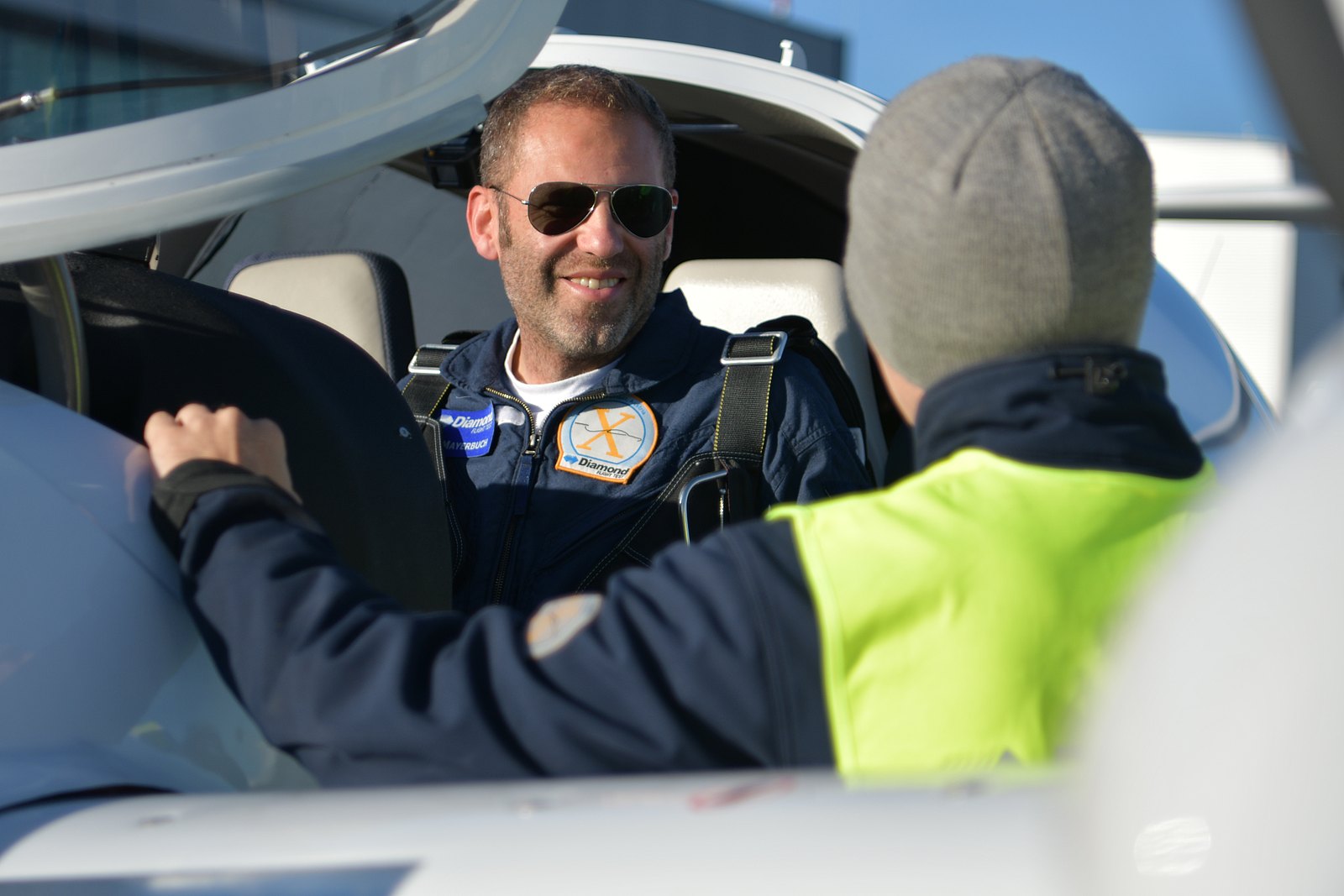 This is the first flying testbed that allows to gain experience with a hybrid propulsion system built up of one genset and multiple electric motors and a system architecture with distributed drives.

The redundant architecture of the propulsion system with two electric motors operating independently allows for increased plane safety. Moreover, in this set-up energy production, energy storage and thrust generation are locally separated – this concept of distributed propulsion will enable aircraft designers to think in new directions at the very beginning of the process of design. 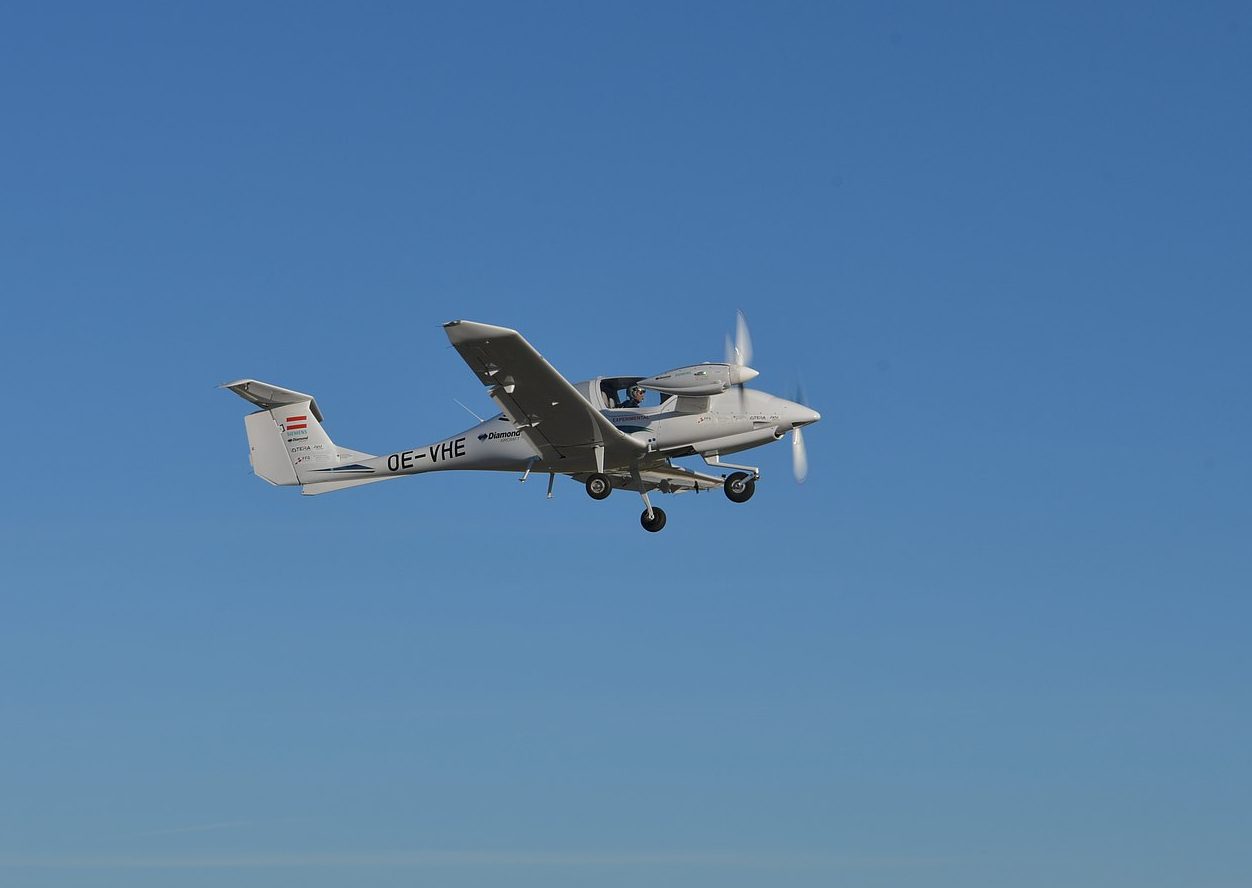 “This is the first serial-hybrid electric plane in the world with two electrically powered free-stream propellers and one combustion engine. A distributed propulsion architecture opens entirely new possibilities for the design of highly efficient planes – and we have now proven its technical feasibility”, says Dr. Frank Anton, Executive Vice President eAircraft at Siemens AG.

The project started in 2013 and is driven under the supervision and finance of the Bundesministerium für Wirschaft und Energie (BMWi, German Ministery of Economics) and the Bundesministerium für Verkehr, Innovation und Technologie (BMVIT, Austrian Ministry for Transport, Innovation and Technology). The project has been split into two main work packages.

Siemens AG was responsible for the design and development of the electric powertrain. This was done within the framework of the German LuFo program. Diamond Aircraft was responsible for the reconfiguration of the aircraft and installation of the hybrid-electric powertrain. For this, Diamond partnered together with the TERA Group and the Johannes Kepler Universität Linz. The TERA group preformed the design and dynamic analysis of the generator drive unit. JKU Linz preformed the aerodynamic analysis and simulated the flow interaction between the propeller and airframe to achieve a high overall efficiency. The consortium partners in the HEMEP project play a pioneering role in the field of aviation in the field of electric drive systems, thereby enabling the participating companies to become technology leaders for the future. 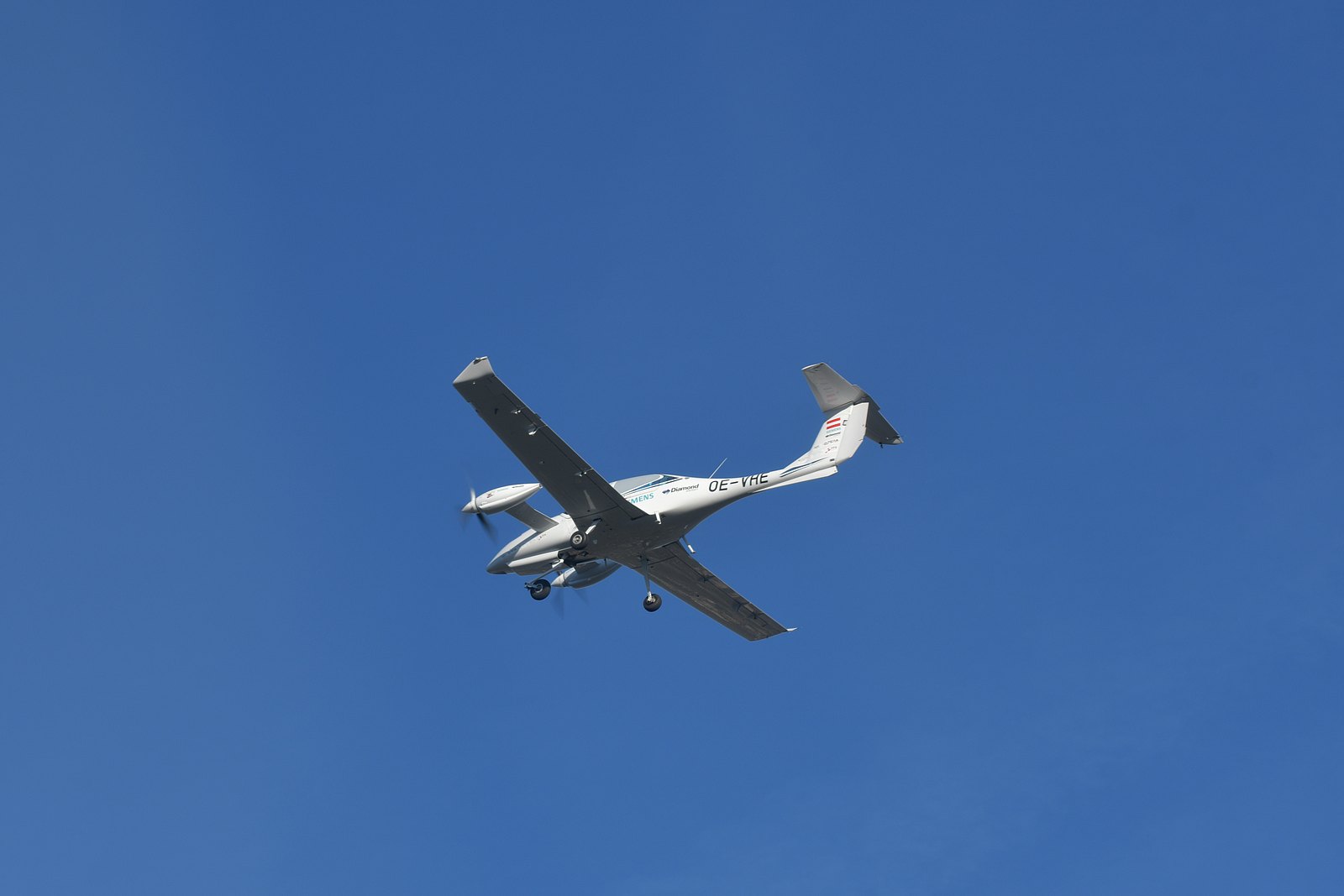 Ingmar Mayerbuch, Head of Flight Test at Diamond Aircraft Industries Gmbh, who piloted the aircraft: “The first flight exceeded all our expectations. The combination of the hybrid powertrain and the configuration of the aircraft is just perfect. We reached 130 knots at medium power output and climbed to an altitude of 3,000 feet.”

The objective of future flight tests will be to determine the exact efficiency increase achieved in comparison to similar non-electric aircraft. Also the noise footprint will be determined. Further, future tests will gather knowledge on the practical operation of hybrid aircraft. Different hybrid modes of operation will be tested and its effect on efficiency, range, and energy consumption will be determined.

“Serial-hybrid electric propulsion systems and distributed propulsion architectures for us are the key to a more sustainable flight future also in higher power classes. The Diamond flying testbed will help us to understand the requirements for these new propulsion technologies and to be prepared for the challenges of larger-scale applications”, Anton says.

This is not the first hybrid electric aircraft developed by a collaboration between Siemens and Diamond. In 2009, the successful implementation of a hybrid powertrain has already been demonstrated in the DA36 E-Star. This initial project showed the opportunities this hybrid technology has in aviation. Learnings from this project were taken and used to improve the propulsion systems over the last few years. This learning step was important and lead to the success of this project.