The Diamond DA40 NG will take you to new heights with Diamond’s turbocharged 170 hp Austro AE300 jet fueled piston engine. Diamond has been delivering diesel DA40’s since 2002 to the world market but not in the US. The DA40 NG was first brought to the US market back in 2009, but the Euro Exchange rates and lower useful loads along with a bit of a market down turn caused it not to take off.

Diamond has made changes to the max take-off weight for the NG, raising to 2888 lbs. This makes the DA40 NG have a useful load almost 80 lbs more than that of the DA40 XLT. This is all coming with a jet fuel powered engine that burns as little as 5 gallons per hour at cruise. This combines to make the range of this aircraft over 900 miles! Typically JET-A costs at least a $1.00 per gallon less than AVGAS.  When you burn less fuel that costs less that really adds up. That makes this plane Diamond’s most efficient single engine aircraft to date. 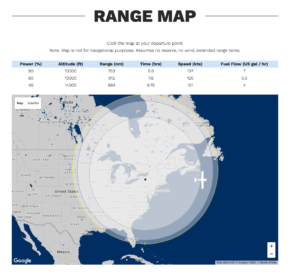 This new aircraft opens up new possibilities for travel and vacation, without opening up the wallet. The fact that the DA40 NG is Turbo Charged and flies higher, faster, farther and carries more load makes with lower cost makes it the obvious winner. Its almost unfair when its compared to typical gas powered aircraft.  Also the DA40 NG is “green”…with low emissions, low fuel consumption, half the oil changes and something that is often overlooked… a very low noise profile. You’ll be “Green” and your flying friends will be green with envy trying to keep up!

The FADEC engine control system brings peace of mind and ease of use. Gone are hot starts, vapor lock, shock cooling, mixtures and propeller control. The FADEC system in the Austro AE300 controls almost all aspects of the engine leaving you with an incredibly efficient easy to use single-lever throttle.

The reversal of the Euro Dollar exchange rate has allowed for US Prices to be be significantly reduced putting the Gas and Diesel choice in the closest price range ever seen. The price difference between a new DA40 XLT and DA40 NG with standard equipment is now small and the DA40 NG with diesel engines burns very little fuel so the savings compound.  Diesels are high durability engines and the Austro sports a low cost OVERHAUL less than gas engines.  “Diesel fuel savings are generally reported to be 25 to 30 percent compared to gasoline engines, and maintenance costs are lower, too,” AOPA article about the future of diesel. The major aviation engine manufacturers are all developing diesel engines and recognize the future is more certain for that fuel than our AVGAS currently used.   Read the full article.

LifeStyle Aviation is offering the DA40 NG  for individual buyers and also through its popular and innovative DiamondShare Program. The DiamondShare program combines the slightly higher acquisition costs with lower fuel and operating cost with cost sharing through DiamondShare Membership for the owner to enjoy the most compelling economics for personal aviation currently available.

“We are excited that the time has now arrived where the diesel version of this amazing DA40 aircraft has been configured to be even more compelling than the gas version.” said John Armstrong, Founder and CEO of LifeStyle Aviation, “Our DiamondShare program makes the economics more compelling than virtually every other option.”

Compared to the DA40 XLT Weights Below:

Learn more about the differences in diesel engines: http://aviation.stackexchange.com/questions/3519/what-are-the-advantages-disadvantages-of-diesel-jet-a-1-piston-engine