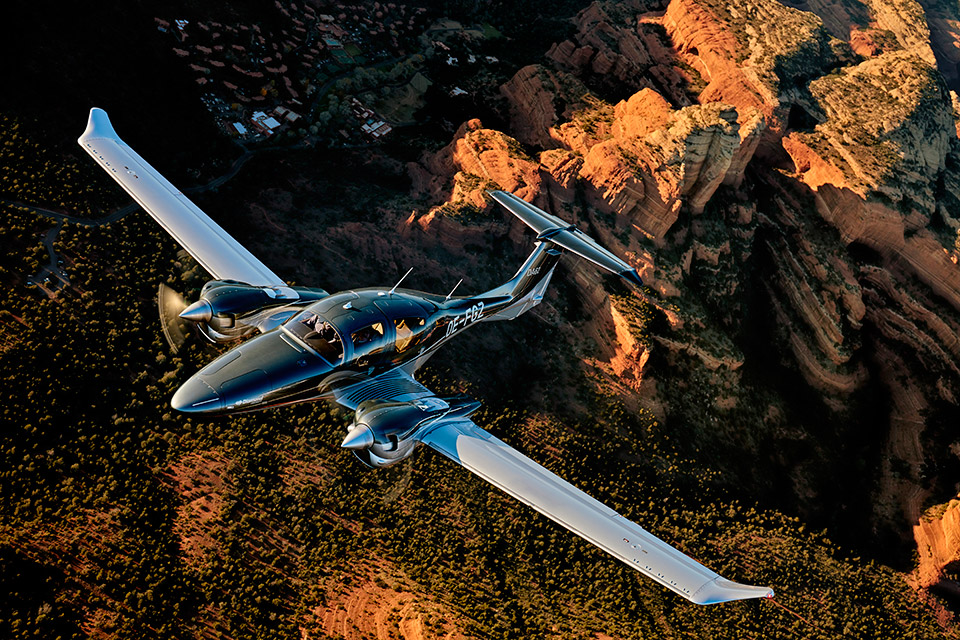 Have a preconception of Diamond Aircraft as a manufacturer that dwells on modestly powered singles and twins, principally aimed at the entry-level market? Better rethink that. With the introduction of Diamond’s new DA62, the company has massively redesigned and upgraded its predecessor twin—the DA42-VI—and in the process created what might be called a re-imagining of the light-twin concept. Or at the very least, Diamond’s light-twin concept.

For more information, visit www.diamond-air.at/twin-engine-aircraft/da62.html. All specifications are based on manufacturer’s calculations. All performance figures are based on standard day, standard atmosphere, gross weight conditions unless otherwise noted. 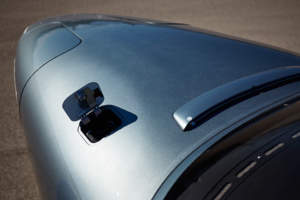 With the DA62, Diamond has raised the bar in almost every aspect. First, the DA62 is physically larger, with a nearly 48-foot wingspan and a 30-foot length; that’s four feet and two feet more, respectively, than the DA42. The DA62 is some 660 pounds heavier, too, with a maximum takeoff weight of 5,071 pounds for those bound to the U.S. market. (Diamond posts a lighter, 4,407-pound weight for European DA62s—and the DA42, as well—in order to avoid user fees.) 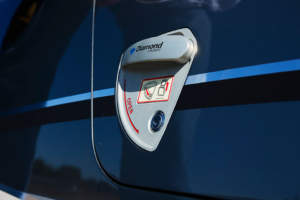 A new door latch is disengaged when the door is locked, which prevents the over-eager from damaging the internal gears.

And there’s upscale leather seating and trim details, complete with stitching along the glareshield, and a fancy center console and armrest. “Frankly, we haven’t been going for a luxury look in the past,” said one U.S. Diamond dealer. “But with the DA62 we made a conscious effort to go upscale. For example, we looked at what Cirrus does with its interiors and decided that we needed to up our game in order to stay competitive.” That said, the DA62 retains Diamond’s fixed-position, reclined, sailplane-style pilot seat design and central control-stick placement. If there have been any complaints, they’ve been about that control stick, because it can interfere with smooth boarding and get in the way of charts or iPads. Maybe there will be a sidestick in Diamond’s future? 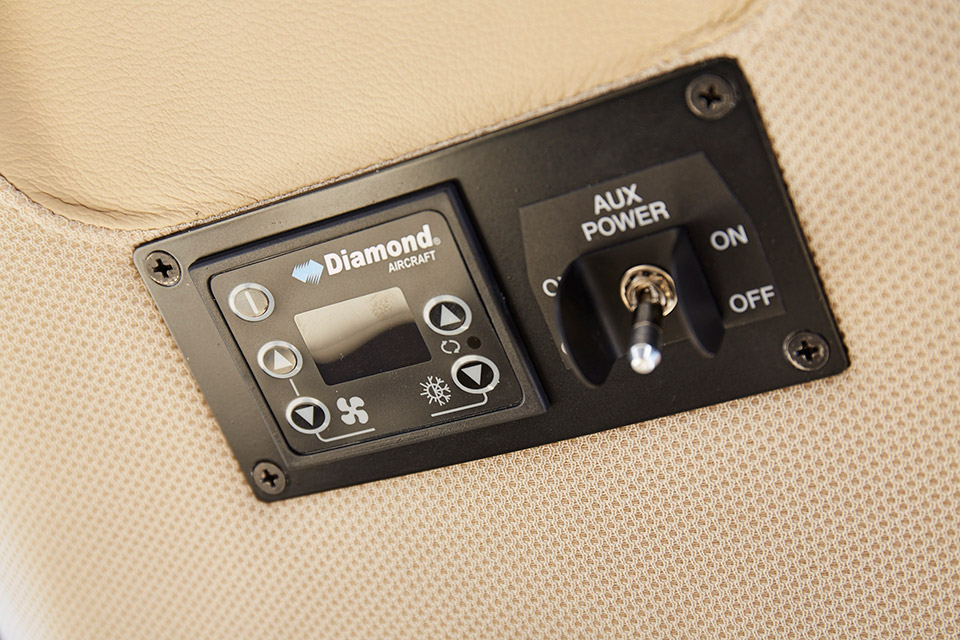 The overhead control panel for the optional, $34,684 air-conditioning system.

The thigh-support portion of the DA62’s pilot seats folds down for easy boarding, meaning that you no longer have to step on the seat to get in. The seat-back position is adjustable, and the seats have inflatable lumbar support. And what’s this? Cup holders, and even customized fixtures on the forward sidewalls that are designed to hold water bottles. Meanwhile, the airplane’s monocoque cabin structure is designed for optimal crashworthiness. I flew the Austrian-registered DA62—OE-FGZ—from Las Vegas’ McCarran International Airport to Sedona, Arizona. With me was Seosamh Somers, president of a Diamond Flight Center and flight school based in Long Beach, California. During the walkaround Somers explained the airplane’s classy gray-and-silver paint job by saying that Diamond had come up with a new ultraviolet-tolerant composite construction process that doesn’t limit the exterior to a plain white treatment.

As with any automotive diesel engine used in an airplane application (Austro engines use Mercedes-Benz crankcases, and top ends designed to Diamond specifications), DA62 engine starts involve turning on the engine master switches and then waiting for the glow plug annunciators on the primary flight display to extinguish. Then it’s a matter of momentarily pressing an engine start button. The engines instantly come to life; there are no cold- or hot-start procedures with FADEC. 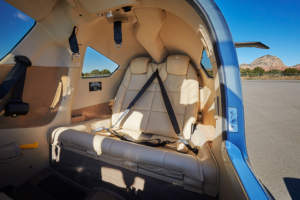 Runups consist mainly of FADEC checks. Hold down the engine control unit switches for 30 seconds while a test cycle runs the engines up to 45-percent power, and then check both the A and B FADEC channels for each engine by moving a toggle switch manually between the channels, then return it to the Auto position. You’re looking for any caution or advisory system messages on the G1000. No messages? Then it’s time to taxi.

It takes firm rudder pressure to maneuver the DA62 while taxiing. That’s because the airplane is approved for operations on unimproved runways, and thus has larger tires.

This turns out to be an advantage during takeoffs and landings, when the airplane seems more sure-footed. With the ship’s weight and steering feel, there’s definitely a “big airplane” sensation as the DA62 accelerates to its 76-knot rotation speed. Then it’s a liftoff into a 90-knot initial climb doing 1,100 fpm. Initially we used a 130-knot en route climb speed, and then went to 150 knots once passing through 7,000 feet. This produced a 900-fpm rate of climb. Density altitude at Las Vegas was 4,000 feet for takeoff.

The first cruising altitude of the 180-nm trip was 13,500 feet, where I made a check of high-speed cruise performance. With power set at 93 percent we trued out at 194 knots while burning 9.4 gph per side, with the FADEC giving us 2,200 propeller rpm. With our optional 86 gallons of Jet-A, our endurance would have been around four hours with IFR fuel reserves, and our range approximately 770 nm.

At a more reasonable setting of 60-percent power, we did a respectable 167 KTAS while realizing a 12 gph total fuel burn that would give us an endurance of seven hours. And at 40-percent power, fuel burn dropped to 4.2 gph per side, for a whopping 11-hour endurance and 1,540-nm range at 140 KTAS. You’d need a relief tube (which is not available, by the way) to take advantage of this kind of performance, but it does demonstrate the DA62’s impressive fuel efficiency—and confirms another reason for Diamond’s commitment to diesel power. (The scarcity and price of avgas in Europe, and the virtual absence of avgas in Diamond’s large Russian and Asian markets are others).

Down at a more typical, nonoxygen altitude of 9,500 feet, the DA62 gave us 173 KTAS on a 14-gph fuel burn for a range of 680 or so nautical miles. Ultimately, even with all the climbing, descending, and power changes, we reached the red rocks and dramatic vistas of Sedona in just one hour, 12 minutes. Not bad at all. 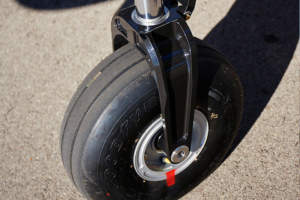 I wish I could tell you that landing the DA62 gave me the chance to show off my superb energy management in the pattern, and my flawless judgment at the moment of touchdown. But no. The airplane is completely conventional in its behavior, and if you can land any complex single or light twin, then you’ll have little trouble.

Well, at Sedona, the landings are a tad unusual. For our entry to the downwind leg for Runway 3, we flew hard by the east edges of Thunder Mountain for a close-up view of that dramatic checkpoint, then reduced power. Then gear down abeam the touchdown point, and at 130 knots the first notch of flaps came out. On final, a power setting of 37 percent and full flaps produced a speed of 85 to 90 knots for short final.

With the FADECs, there’s no propeller or mixture controls to fool with, so it’s just fly to the threshold, adjusting power and crosswind correction as necessary. Runway 3 slopes uphill, so there’s the illusion of being too high. Fall for it, and you’ll find yourself too low, so using the VASI is the way to go. Power off at 20 feet or so, hold your pitch attitude, and—erk-erk!—you’re down in style.

The next day was photo day. With AOPA Senior Photographer Mike Fizer leaning out the back of a Beech Bonanza A36, Somers and I flew in formation over the sun-drenched mesas and crag-lined valleys as daylight cast ever-longer shadows. Of course, the DA62 had no trouble matching the Bonanza’s speed. Sometimes, for video shots, I did breakaway maneuvers where I banked sharply away from the camera airplane. Then, when rejoining for more shots, I’d have to do steep banks toward the Bonanza to quickly fall into place. A couple of times, my banks were 45 degrees, or maybe a little more. That’s when I felt the ESP kick in. Go past 30 degrees or so, and the ESP will begin to fight your stick pressure; the steeper your bank, the more resistance you feel. It’s a fly-by-wire-style method of keeping you safely within the flight envelope, and there are pitch limits as well. I can see where ESP could keep you out of trouble, especially when hand-flying in challenging instrument conditions.

The photo shoot finished, it was time for some engine-out work. Again, the FADECs help. Use standard dead foot/dead engine identification (with a check of engine gauges to verify a loss of power), and then simply switch off the bad engine’s master switch. The engine stops—as in instantaneously. Use a feathering switch to complete prop feathering, and then retrim for the new configuration. Thanks to the turbos, single-engine climb rates at 7,000 feet came in at 350 fpm, but there were just two of us aboard. Down low, at maximum takeoff weight, single-engine climb rates run in the range of 200 fpm, depending on density altitude. Hey, it’s a 5,700-pound airplane climbing on 180 horsepower.

On the last day of the trip, we were joined by Michael Dubrow, a local video producer. Now there were four in the cabin, with both Fizer and Dubrow shooting video. They had plenty of room, so it was an enjoyable half-hour doing steep turns and slow flight over scenery that every pilot should experience at least once in a lifetime. We even saw a group balloon launch far below us. 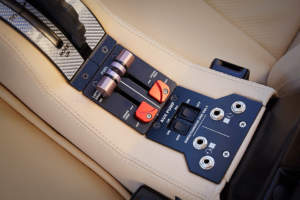 Diamond sees a short-haul charter market for the seven-seat version of the DA62. That may be, but baggage space is sharply curtailed by that aft two-seat option. And the GWX 70 takes up much of the room in the nose baggage compartment. So the DA62 may have stronger appeal to those wanting to fly four or five passengers in comfort, style, and economy. True, its million-dollar price tag rivals that of a competitor, the Textron/Beechcraft Baron G58. But the DA62’s fuel efficiency means that less fuel is needed to carry larger loads over typical trip lengths. In models without TKS and air conditioning, that means five passengers and their bags theoretically can fly 400 nm in 2.3 hours or so, with IFR reserves, depending on winds and assuming 70-percent power at 9,500 feet. On the other hand, if range is what you want, then two aboard with full fuel can let you fly more than halfway across the nation.

Diamond announced in February that the DA62 had earned FAA certification. We’ll see how this new light twin is received. Orders have been placed, Diamond says, but it doesn’t say how many. In the meantime, the company is selling its DA40 and DA42, and remains ever focused on research and development. Diamond continues its experiments with autonomous landing and other concepts at its Wiener Neustadt, Austria, manufacturing site. The autonomous landing idea is to bring an airplane in distress to a safe landing by remote control using GPS and ground-based guidance. Until that project comes to fruition, a second engine will have to serve as the emergency backup.