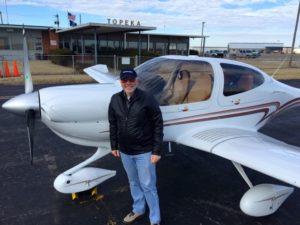 North Carolina to Colorado in a Diamond DA40

In our business we help many people from all parts of the world acquire aircrafts. The most enjoyable parts of our business are building long term relationships that allow us to help clients each time they are ready for different aircraft and then of course we like to make the process of delivering planes fun. This story combines these elements perfectly. 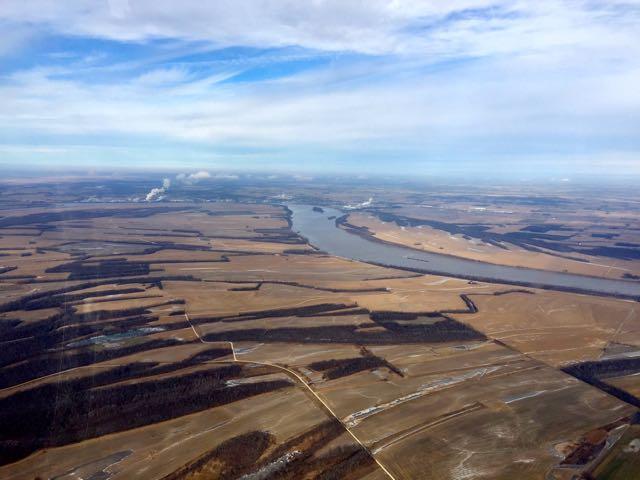 Rod Lusk started out in the family Piper Tri-Pacer and 182. He went on to get 350 hours in gliders and his first aircraft was a steam gauge Diamond DA40. As a physician he is world renown in his specialty. He flies mostly for pleasure and personal transportation.

We helped Rod make the move from steam gauges to glass in the DA40 line and even trade up to a late model DA40 and then on to a twin DA42. When he retired last year to Colorado he decided the DA42 was bit more plane than he needed now and he wanted to trade back to a DA40 as it had served him so well for many years. We arranged the trade of his DA42 for a lovely DA40. Rod said now that he was retired he might like to come to the east coast to take delivery and fly the plane back to Colorado where he and his wife Connie had just moved. He asked if I would accompany him as he’d feel more comfortable with another pilot along. The suggestion we’d get in a day of skiing in Colorado sealed the deal for me. 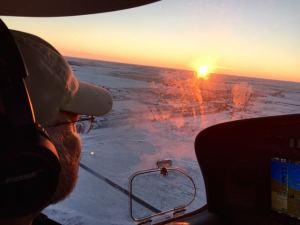 Most pilots would not think it practical to use a 145KT aircraft to go to Colorado for skiing so I was keen to see how the trip worked out and compare it to airline travel in my never ending pursuit of illustrating the efficiency of private air travel.

Rod said he was free the next week so the plan was set; he would fly to Raleigh NC on aWednesday afternoon in early January and we’d have dinner and get up and launch earlyThursday morning.

When Rod arrived we noted that his airline trip from west to east with an hour drive to the Denver airport, strong tailwinds for the airliner and a stop in Chicago took about 11 hours door to door. As we reviewed our flight plans over dinner at my favorite Greek Restaurant’s fare we noted that the flying time in our flight plan was only about 9 hours with no winds.

As many of you know there are usually larger headwinds in the winter. Head 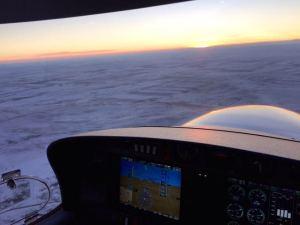 winds are hard to predict until the day of flight so we guessed that it might take us 10-12 hours to make the same trip back to his home base 1262 miles away. Without winds the trip is only a two stop affair. We agreed we’d plan three stops and see how we felt as we went and what the winds were. The beauty of flying our modern magic carpets that have onboard weather with flight and fuel computers is its effortless to consider your route options once you get started on your first leg.

A high pressure system dominated the country and cold air was pressing into the south. We started the engine at 6AM at 27 degrees and took extra time to let it warm up. We of course had the winter baffle kit installed in the plane which is the small metal baffle that blocks the air to the cylinder area and the oil cooler to help warm the oil and engine in cold temperatures. Many pilots don’t know that the ideal temperature for the oil during flight is 180 degrees Fahrenheit. This temp is measured at the bottom of the engine and if its 180 at the bottom it will be 212 at the top or more which is what’s needed to boil out any moisture. “Babying the engine” and not getting the oil temp to 180 is actually what keeps moisture in the oil.

Our pre-dawn departure was smooth and we climbed of RDU international airport with a few airliners getting a jump on the day and headed west.  We requested to stay low at 4,000 feet as it was already clear flying high today was not in the cards due to the forecasted headwinds. We were able to stay at 4 then 6 then 8 thousand as we approached the mountains to minimize winds. Actually the first leg was not bad and we saw headwinds of 10-25KTS. 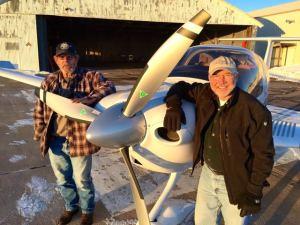 Our first planned stop was Bowling Green Kentucky. At 8000 feet over the Appalachian range I asked Rod if he was up for stretching it a bit further. He was game and I was able to text from over the mountains to Jon Becker of Don Davis Aviation in Henderson Kentucky to see if he was going to be in the office that morning. We carried on a nice text chat and he was going to be there so we pointed the nose of the DA40 to KEHR where we could visit Jon and a DA40 we’d just delivered for their fleet the month before. Its always fun to fly around and meet friends along the way. The folks at Don Davis have three DA40’s now and operate a full service FBO operation on the western edge of Kentucky.

I told Rod the most important issue on this cross country flight that we had not resolved was where to stop for lunch!  We asked Jon Becker and he recommend Jacks Stax in Kansas City. Rod said his son was a manager there and that indeed it was the best food around. Ultimately we decided it would take too long for that culinary side trip so we went in search of the ideal waypoint with on the field restaurant. We hit the jackpot when we found exactly on our course line Billards Landing Cafe better known as Tammy’s Buffet. It was the perfect distance, right on the field and I had a feeling it was going to serve up the ultimate home town experience along with the “home cooking”. 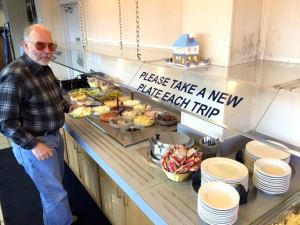 We waved goodbye to the folks at Don Davis and off we went. Again we filed for only 4000 feet to minimize the head winds. At that altitude we enjoyed a steady view of rivers and farmlands in the windscreen. Our route took us right over the top of Jefferson City the capital of Missouri. The river there was filled with ice flows and the temps continued to be frigid. The heat on the DA40 works like a champ and made our ride a pleasant affair. The farther west we went the winds had shifted completely from north to coming from the south and they grew significantly.  At one point we saw total wind in the 71Kt range. Our true airspeed for for the entire trip was about 145KTS. The lowest we saw on ground speed at one point was in the 80’s. We spend most of our time in the 120+KTS ground speed realm.

On our way to Topeka and the delicious treats that that awaited us there, I reviewed the remainder of the trip and was amazed to see that even with the strong headwinds we’d be able to make our destination without another stop. The winds after Topeka looked like they would be a tad less so we were quite encouraged.

As expected Tammy’s Buffet was a mid-western classic treat. A salad and buffet bar with hearty selection of mash potatoes, salisbury steak with thick gravy, fried chicken, a chicken cheese rice casserole and green beans. The green beans were the ultimate treat. You see when you close your eyes and eat these beans you can’t tell if you are eating green beans or bacon which is just to say they were seasoned “just right”! 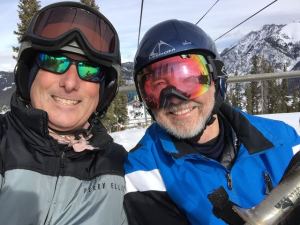 A one hour stop with meal and top off and we were ready for the sky again. On the next leg the winds did reduce a bit and the range ring stayed just on the western side of our destination Fort Collins/Loveland Field north of Denver. We agreed our bladders would make the distance and we pressed on. During the next portion I learned something about flying in this part of the country that was a good lesson. As it turns out ATC does not have very good radar coverage and their minimum altitudes they can offer on IFR were pretty high. Our destination airport was over 5000ft MSL and ATC took us from 4000 to 6000 to 10,000 which meant more headwinds. As we considered our reserves and the headwinds we pondered the other “minor” challenge.

Weather was closing in from the West and the temps were in the 20’s. Our destination was forecasting to be IFR and conditions dropping. The real question was how thick were the clouds and would we encounter ice. On our way up from 4k to 10k the clouds arrived. We played hopscotch in and out of the clouds and watched for ice. Upon arrive at 10k we of course had more head winds and with night falling and the reserve ring shrinking and ice starting to form on the wings we consulted with ATC to see if they had the option to drop us back through the clouds to get under the thick overcast. They informed us due to radar coverage limits there was no way to get us low enough and of course if there was no way to get to VFR before canceling we could not pursue that route. We advised ATC we’d divert slightly north of course to Sterling KSTK where the ceilings were above 2900 hundred. From there we’d be able to top off and complete the trip VFR under the ceilings.

Before we turned I looked at the range computer and relished in the thought that even with all the headwinds we had encountered that it was indeed possible and even comfortable to fly from Raleigh NC to Denver with only two stops.  I was sad that I would not be flying the return route to see what the trip would take with 50-100 knot tailwinds headed east. 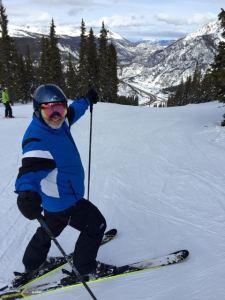 The skiing at Copper Mountain was great! We enjoyed nice weather and excellent skiing conditions. The weekend crowds on I70 made the drive over the pass to the ski resort much longer. I figured that we could have flow all the way back to North Carolina with tail winds in the time we spend driving in that traffic!

I was pleased to help Rod install his new DA40 in very good company in a large shared hangar with a DA42 and another DA40 and a P51 Mustang in the hangar undergoing maintenance on its impressive Merlin engine.

The point sharing this experience is to help those pilots that are considering the Aviation LifeStyle to know what is practical and doable with a 140+ knot modern aircraft aircraft. The trip out for Rod on an airliner took him 11 plus hours. The trip west with headwinds took about the same amount of flying time and less than 100 gallons of fuel or two tanks.

On Sunday Rod and Connie dropped me at the gargantuan Denver airport with lots of smiles and thanks all around. I watched as the streams of people disrobed and stood in the x-ray machines in the name of security. When it came time for me I asked to opt-out of the machine just to see what the experience was like since I had not tried that. Well let me just tell you the pat downs these days are quite the experience!  I think I’ll stick to the DA40 traveling on my own schedule!

John Armstrong is the founder and President of the LifeStyle Aviation Network.